HUMABIO meeting in Madrid
November, 28th 2007
The next HUMABIO meeting will be held at the premises of Telefonica in Madrid, Spain on January 30th and 31st. On the meeting final system integration will be achieved and the system will be prepared for the truck pilot in Goteborg, the airport pilot in Basel and laboratory pilot in Stuttgart. Pilot sites will present their experimental plan.

Updated HUMABIO Homepage
November, 28th 2007
The HUMABIO Homepage has been updated with the user forum, a platform for experts in the field of biometrics, sensor technology and public acceptance. The membership provides you with special access to not public deliverables of the project and the chance to participate in the discussion of topics rose in the project.

HUMABIO is now entering a new phase and passes from sensor development to system integration and system evaluation in pilot tests. Consequently a new section about pilot tests has been added on the HUMABIO Homepage. Early 2008 the HUMABIO pilot tests will be conducted to test the developed system in various settings. The new section contains presentation of the test sites and will provide informative news about progress and achievements.

Please have also a look on the now extended publication list with all publications online available!

HUMABIO meeting in Pisa
August, 1st 2007
The next HUMABIO meeting will be held in Pisa at the University of Pisa on October 30th and 31st. One main topic will be the integration and setup of sensors for the truck scenario.

HUMABIO 3rd Newsletter
July, 24th 2007
We are pleased to issue the 3rd HUMABIO Newsletter describing the newest results of the project and highlighting its major related event, the 1st Pan-European Workshop that was held in Basel on February 2nd, 2007.

HUMABIO meeting in Toulouse
July, 18th 2007
The plenary meeting of HUMABIO took place on July, 11th 2007 at SIEMENS VDO in Toulouse. Important topic was the "Gait authentication, validation, monitoring potential". Read more about the topics of the conference in the agenda!

Afterwards on 2nd of February 2007 the Pan-European Workshop at COAT-Basel was realized.

HUMABIO 1st project review
February, 7th 2007
The 1st project review took place on March 2, 2007 in Brussels. Key results and the technical progress of HUMABIO were successfully presented. The overall assessment was that HUMABIO has fully achieved its objectives and technical goals for the first period.

Article about HUMABIO
January, 31st 2007
An electronic security system that identifies people by monitoring the unique pattern of electrical activity within their brain was being tested by European scientists.

HUMABIO 2nd Newsletter
January, 22nd 2007
In this issue you will find interesting articles covering the work done the first year of the project, as well as various dissemination activities that we have participated. 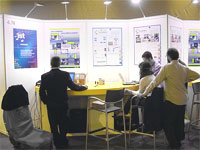 HUMABIO was present with a stand in the IST Event 2006, held in Helsinki on November 21st-23rd. The IST Event is organised by the European Commission, and it aims to show concrete results of research in and around Europe within the field of information and communications technologies. In the HUMABIO exhibition stand, some of the new biometrics methods that the consortium is developing were demonstrated, in addition to the presentation of the project concept and application scenarios. 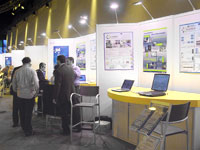 A system for human identification based on physiological signals analysis was displayed and tested. Visitors could actively participate by having their own heart and brain electrical activity measured during some minutes with only few electrodes, those of easiest and less intrusive application. A graphic user interface was designed, virtually resembling a high security system, in which the results of the feature extraction and signal classification were shown to the visitors in terms of acceptance/non acceptance of the person trying to access the system. The characteristic features of the EEG and ECG were extracted and compared with a pre-existing database; since the visitors were not included in the existing database, the system classified the signal as coming from an intruder and an imaginary access was denied.

Moreover, a seat with embedded strain sensors was used by visitors in order to get features calculated from their anthropometric profile. This procedure took place simultaneously to the EEG/ECG acquisition, as an example of a multimodal biometrics system.

The main objective of the exhibition was to promote the innovative results of the HUMABIO project to a wider community of potential users, and to provide a basis for future developments in the 7th Framework Programme. In addition to the experimental demonstrators, project brochures were distributed and promotional posters were specifically designed for the event. 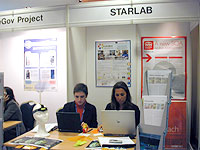 HUMABIO was present at the eChallenges e-2006 Conference, which took place on October 25-27th in Barcelona. The eChallenges conference is focused on current applied ICT challenges in government, business and research. One of the HUMABIO partners, Starlab, had a stand in the conference and took the chance to promote the project. A set of low intrusive EEG sensors was shown and its biometrics applications were explained to visitors. Promotional material (poster and brochures) was also placed at the stand. Visitors included representatives from projects in e-government and e-business, security companies, and technology developers.

More information about this workshop can be found at http://www.gts.tsc.uvigo.es/BioSecureWorkshop

HUMABIO 1st Newsletter
July, 31st 2006
Welcome to the first newsletter of the European project HUMABIO.The purpose of this issue is to introduce to the reader the concept of "Biometrics" and "Authentication" and address the main shortcomings of current biometric authentication systems that HUMABIO aims to solve.
Download newsletter and read more!

IST Event, Helsinki
November, 21st - 23rd 2006
A HUMABIO exhibition stand has been accepted for the IST 2006 Event. In the exhibition, the biometric authentication potential of features extracted from physiological signals and anthropometric profile will be demonstrated in addition to the presentation of HUMABIO's concept and application scenarios.
Download pdf document and read more!

Meeting in Barcelona, Spain
May, 15 - 16th 2006
The last plenary meeting of HUMABIO took place at STARLAB in Barcelona.

HUMABIO presentation
March, 22nd 2006
HUMABIO was represented by the coordinator Dimitrios Tzovaras at the SecurIST Workshop on the "Integration of 'new' D4 Projects with SecurIST" in Brussels at March, 22nd 2006.

HUMABIO presentation in Basel
February, 2nd 2006
A presentation of HUMABIO in the form of an invited paper will be considered for the 1st SENSATION International Conference, which will be held on the 29th and 30th of May in Basel.

Kick-Off Meeting in Thessaloniki (Greece)
January, 26th 2006
The HUMABIO project has officially started its activities with a kick-off meeting in Thessaloniki 23rd - 24th January 2006. The main objective of the project is to enhance the security infrastructure in the industry and generally in information sensitive environments, through the use of new types of biometrics that describe the person's internal rather than external physiology.